Illuminate Digital LLC.
Nov 29, 2022
Friends of Pool 9 – Upper Miss. Refuge, Inc.Board of Directors MeetingNovember 14, 2022 Driftless Education & Visitor Center
In FOP 9 Meeting Minutes
The Friends of Pool 9 (FOP9) Board of Directors met at the Driftless Area Education & Visitor Center. President Alex Galema. called the meeting to order at 7:00 PM. Directors in attendance were, Bob Henkel, Larry Quamme, Jerry Boardman, Kevin Quillin, John Verdon, Blake Schoh, Alex Galema, John Mitchell, Bruce ReVoir, Sue English and Christa Hall. Also attending Director Elect Ric Zarwell and Kendra Pednault, FWS. Approve Minutes – 10/10/22 – On motion by John M., second by Kevin, the minutes were approved as written. Financial Report – Larry presented the report for the period of 1/1/22 to 10/31/22. Income for the period is $99,444.99, expenses total $27,044.80 with cash being $147,260.37 on 10/31/22. After discussion, Bob moved to approve the financial report and also place $100,000 in a 24-month CD at Kerndt Saving Bank, Lansing. Following the second by John V., the motion carried. Replace Computer – Larry indicated that the FOP9 owned laptop was purchased in 2014 and after 9 years experienced some issues. Quotes from Siebring Enterprises, New Albin were presented. After discussion, John V. moved, Kevin offered the second, and the option for the Acer Intel at $928.00 was approved. Software costing $90.00 may also be required. Fish & Wildlife Items – Kendra indicated that a video on the “Voluntary Avoidance Area” and also some yard signs to educate hunters, would be available for the 2024 season. FOP9 will assist with distribution on the FaceBook page and website. She also informed the directors that the federal budget was flat lined and several positions will not be filled. The plans for the new district office in Harpers Ferry continue in the design phase at about 65% completed. Costs are exceeding estimates so work continues on design and possible increased budget funds. She also reported that the Reno Project will be entering the comment period shortly and Alex indicated that he and Ric had attended the open house in New Albin recently where plans were displayed and they provided some details. A handout “An Introduction to Common Species” provided by the Upper Mississippi River National Wildlife & Fish refuge has been given to MRAD students. There is a need to obtain more copies. Kendra will be checking on options for more copies but her office does have 40 or so copies for the 2023 MRAD event. She also indicated that the district 2023 work plan would be developed and shared with the FOP9 Board. 2023 Committee Assignments – FOP9 committee assignments were finalized and the secretary will distribute the listing to board members. Youth Scholarship Levels – With the success of the annual raffle, Sue, a member of the scholarship committee, proposed that increased levels of support be considered. The proposal increased the two College Scholarships to $1,000, the 2 Technical college to $750 and the one good citizenship award to $500 at each of the two high schools. Sue moved to approve the $8,000 annual cost and on the second from Christa, the motion was approved. Ferryville Eagle Day – The written request from the Ferryville Tourism Council was discussed. Sue agreed to represent the FOP9 on the Eagle Day Planning Committee. On motion by John V., second by Jerry, the board approved that the FOP9 will co-sponsor the event and donate the requested $1,000. The FOP9 will also have a booth and will sell clothes and take donations. 2023 Board Meeting Dates – Dates for Board Meetings in 2023 will be; March 13, May 8, July 10, October 9 and November 13. Following the by-laws, the annual meeting will be scheduled for September 23. 2022 Year-End Newsletter – John reviewed the articles and noted the ones that need to be received by 11/18 enabling him to provide content to the printer. 100 Year Refuge Anniversary – Ric and Larry presented an overview of the planning committee ideas. Early in 2023 they will be able to provide more details and budget requests to the board. Pool 9 Bass Tournaments – Alex followed up after the October meeting with Karen Osterkamp, Iowa DNR. He read an email from her noting that she will be putting together a statewide tournament committee as she indicated there are many concerns coming to their attention. She indicated she would stay in touch. 2022 River Landing Porta Potties – The board discussed the end date based on the change in weather. The secretary was directed to notify the vendor to pick up all the units. Pool 9 Map – Blake indicated and suggested there is a need for a good map needed for Pool 9 noting maintained beaches, trails, danger locations and information that would be of assistance to visitors to our area. The idea will be on the projects list. Adjournment – On motion by Jerry, second by Blake, the meeting adjourned at 8:40pm. Next Board Meeting March 13, 2023. Larry Quamme Secretary/Treasurer
0
0
2
Illuminate Digital LLC.
Oct 01, 2020
AMERICA’S MOST ENDANGERED RIVERS® 2020
In Mississippi River News
“Every single person — no matter where they live, what they look like or how much money they make — should have access to clean water and a healthy river. It is a human right.” — Bob Irvin, President, and CEO of American Rivers 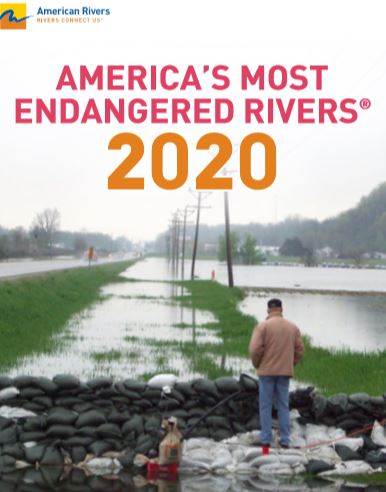 0
0
2
Illuminate Digital LLC.
Oct 01, 2020
Friends of Pool 9, Upper Miss Refuge, Inc. Holds Annual Meeting
In FOP News & Events
Since an annual meeting is required by their By-Laws, Friends of Pool 9 members gathered at the New Albin Community Center on Saturday, September 22. The 159 attendees were treated to a dinner of beef brisket and chicken prepared by Milty's Restaurant in Lansing; salads, veggies, and dessert completed the meal. Members arrived early for the camaraderie of the social hour, as they reminisced the years activities and events. Two rooms were rimmed with Silent Auction items, ranging from tasty foods to tackle boxes with lures and other outdoor items, as well as trips and wine packages that teased the pocketbook of everyone. Photo (1st one) caption should read: Bidders add their price and name to the bid sheets as they visit with friends during the Silent Auction during the FOP9 annual meeting, September 22, 2018. During the Business Meeting Secretary/Treasurer Quamme reported that the Friends of Pool 9 account on August 31, 2018 shows Total Income of $38,369 for the year and Total Expenses of $23,644 for the year; leaving a Checking/Savings balance of $46,622.28. Five Board members were re-elected at the meeting and the following have agreed to serve for the next three years to 2021: Sue English, Joe Mazenec, Larry Quamme, Lisa Welsh, Al Wuennecke. The FOP9 raffle was also a great success and the winning ticket for the $500 cash prize went to Deedee Drew, the $300 ticket to Al Wuennecke, and the $200 was won by Avani and Anya Quamme. Don Larsen was a winner in the FOP9 Photo Contest, as was Ron Moore President Natalie Baugher announced Emil Bronecki as the Friends of Pool 9 Volunteer of the Year (not in attendance) for his volunteerism. He has been active on the clean-ups, working at Genoa on the clam cages and the sturgeon tagging, as well as the special beach projects. John Verdon also gave a "special courage" Volunteer of the Year Award to Anne Gallagher (also not in attendance) for her service and commitment. She has been active on special projects at Genoa and became known as "Anne the riveter" while working on clam cages. She has been struggling with an illness but still finds time and energy to help FOP9. John also recognized her effort with the 100 Hour Volunteer pin. Wendy Woyczik Assistant Manager US Fish and Wildlife Service, Mc Gregor District gave Volunteer Hour pins to members that had achieved certain levels. 100 Hour to Emil Bronecki, Karen Hutson, Don Lathrop, Deb Masek; 250 Hour to Sue English, Russ Hagen, George Olson; 1000 Hour to Jerry Boardman and 2000 Hour to Ric Zarwell. Photo #2 caption should read: The following were in attendance at the meeting and received their pins: L. to R. Don Lathrop (100), Sue English (250), Jerry Boardman (1,000), Ric Zarwell (2,000), Wendy Woyczik US FWS. Some of the Live Auction items drew particular interest including a rifle from the Civil War era, a metal name plate of the FOP9 logo, a hand-sewed quilt made from FOP9 colorful t-shirts, and special taffy and pretzel treats. Larry Quamme was the auctioneer and did a masterful job of getting everyone involved in the spirit of giving. President Natalie Baugher thanked everyone for their attendance, their financial generosity, their commitment to Friends of Pool 9, and to the river itself. None of what we do would be possible without the effort of all the volunteers that give thousands of hours annually to make Pool 9 one of the best on the Upper Mississippi River. Thanks to all of you. 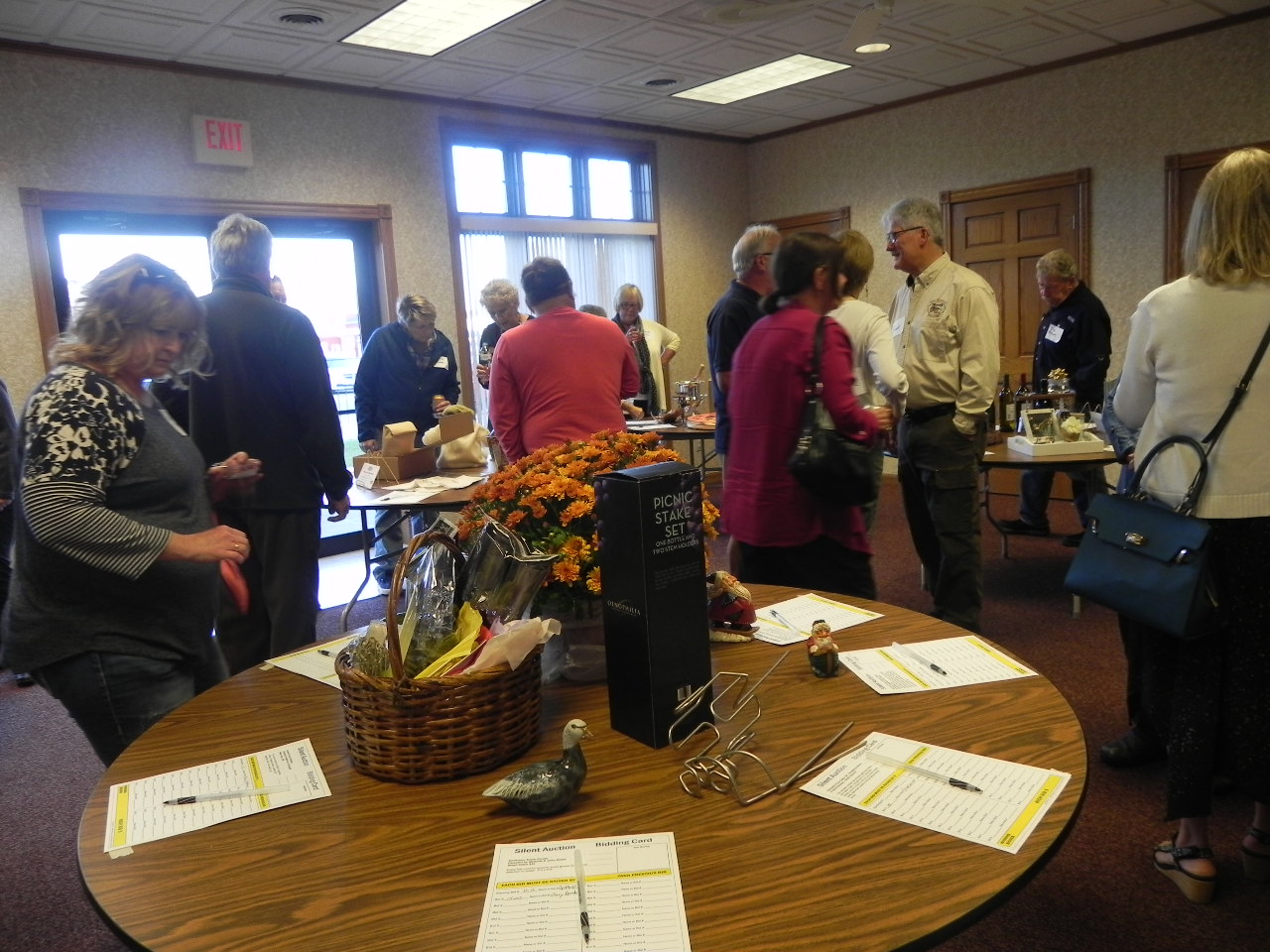